If you asked 10 people with acid reflux disease why they have GERD symptoms, 9 of them would tell you it’s too much acid in the stomach. That is not only wrong but also it is a dangerous misconception that leads to risky treatment decisions. The only reason for GERD symptoms is due to a weakened or damaged lower esophageal sphincter (LES), which has lost it ability to provide a barrier between the stomach and the esophagus. So let’s look at how the LES gets damaged in the first place resulting in GERD symptoms.

In an article titled; What causes heartburn? The role of the LES, we describe the LES and its role in detail. Basically, it is a band of muscles located slightly above the point where the esophagus connects with the stomach. Its basic function is to remain closed until called to open during swallowing – then it opens momentarily. For most adults, this involuntary band of muscles functions without any thought and very reliably. The image below, courtesy of the National Institute of Health, Patient Information on Acid Reflux, illustrates the lower esophageal sphincter and its location relative to the diaphragm and the stomach. 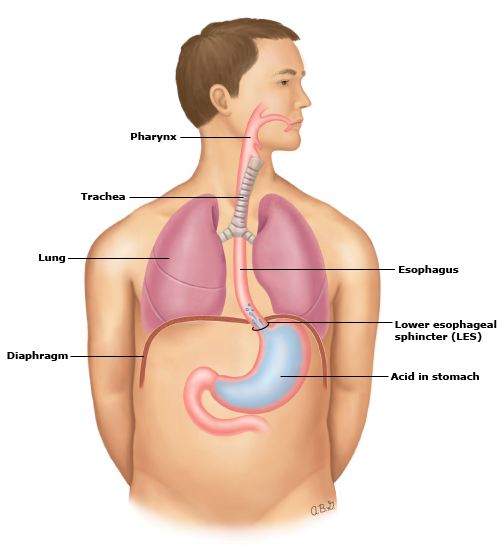 What is the role of stomach acid?

Stomach acid is not only normal but also essential for good digestion. Dr. Para Chandrasoma wrote a very good article on stomach acid titled; Reflux myths: Excess stomach acid causes GERD. In some unusual conditions that result in overproduction of stomach acid (Zollinger-Ellison syndrome) or underproduction of acid, the symptoms are typically severe inflammation of the stomach lining, abdominal pain, nausea, or stomach ulcers. As Dr. Chandrasoma highlights at the end of his article, GERD is ONLY a result of a damaged or weakened lower esophageal sphincter.

If acid does not cause GERD, why do doctors always recommend PPIs?

Acid does not cause GERD, but it is the primary factor in GERD symptoms. When the lower esophageal sphincter is compromised, the highly acidic stomach contents may reach the esophagus resulting in heartburn. PPI medications stop the production of acid, thus making the stomach contents less acidic and reducing or eliminating heartburn. Many PPI users believe the drug has cured their disease, but the reality is that only their symptoms are masked by the medication. Reflux continues and GERD can progress to more serious complications.

How does the lower esophageal sphincter become damaged?

For a specific individual that is a difficult question to answer, however, when we look at the entire adult population, research has determined that the primary driver is being excessively overweight (BMI between 27 and 30), or obese (BMI of 30 or higher). For some, it could be due to frequently eating large meal portions, a hiatal hernia, use of certain medications, pregnancy, smoking, excessive use of alcohol, or a combination of these factors. However, the research on excessive weight and obesity is very clear – it is the driver of both GERD and the progression of more serious complications.

How does excessive weight or obesity cause GERD?

Doctors Para Chandrasoma MD and Tom DeMeester, in their definitive work on this disease, GERD; Reflux to Esophageal Adenocarcinoma, discuss how enlarging the stomach, either through frequent overeating or due to obesity, results in a shorter and weaker lower esophageal sphincter. They note that a normal, healthy LES is 3 to 5 cm, and as this muscle band becomes shorter, it becomes weaker. Dr. Chandrasoma described this process using the example of a balloon:

“It is important to understand what shortening of the sphincter means. Where does the shortened part of the sphincter go? The mechanism is best illustrated by taking a standard round balloon where the long neck is the sphincter and the collapsed part is the empty stomach. As the balloon is blown up, the collapse part fills to capacity; there is little resistance to this phase of filling because there is no significant pressure increase. This is the equivalent of a normal meal and illustrates the reservoir function of the stomach. When air is blown in excess of this its capacity, the balloon distends and pressure increases, the neck shortens by a mechanism in which the most distal part of the neck is “taken up” into the contour of the throat to an extent that is directly related to the amount of the distension. Anyone who has blown up a balloon will remember how the neck of the balloon shortens as the balloon distends. The neck has not disappeared, it is now part of the contour of the distended part of the balloon.”

As the stomach distends, it pulls that portion of the LES down and into the stomach. If this is done often enough, or for those excessively overweight or obese, the damage can result in more frequent and severe symptoms. More importantly, this damage is irreversible; the LES cannot return to its former strength.

Does research support this connection between excessive weight and GERD?

Q1: Does stomach distention shorten the LES resulting in a weaker muscle?

One research study measured the length and strength of the LES before and after gastric distension via pumping air into the stomach. The study confirmed a reduction of the LES from 4.0 cm to 2.6 cm after infusing 750 ccs of air, and a loss in the strength (pressure) of the LES from 27.4 to 23.4 mm Hg.

Q2: Is BMI a good indicator to measure the risk of GERD?

The NIH published a paper titled; Association between body mass index and GERD symptoms in both normal weight and overweight women, the researchers concluded: “In summary, our findings suggest that, beyond being overweight or obese, the risk of GERD symptoms rises progressively with increasing BMI, even among normal weight individuals. This appears true for all degrees of symptom severity and duration, as well as for nocturnal symptoms. Notably, weight loss was associated with a decreased risk of symptoms.”

Q3: Is BMI a factor in disease progression and esophageal cancer?

A research article by Hashem El-Serag MD MPH titled The Association Between Obesity and GERD: A Review of the Epidemiological Evidence, the connection between excessive weight and GERD was clear and convincing: “This meta-analysis indicated that obesity was associated with a significant 1.5- to 2-fold increase in the risk of GERD symptoms and erosive esophagitis, and a 2- to 2.5-fold increase in the risk of esophageal adenocarcinoma as compared to individuals with normal BMI.”

Q4: Is losing weight a strategy to reducing symptoms?

What is the healthy and safe path to reduced GERD symptoms?

We know that the current status quo treatment for daily long-term use of PPIs for some may be necessary, but for many, these medications represent a substantial risk. Research has proven that anyone who is excessively overweight or obese should immediately focus on weight loss as the top priority. Even for those who have gained a few extra pounds, achieving a healthy BMI can have a noticeable positive impact. Our recommendation for anyone in the early stages of acid reflux disease is as follows:

If you have an elevated BMI and you have been diagnosed with GERD, the clock is running. This is a progressive disease that will not improve unless you take action. YOU are the primary factor that will determine your health, and your quality of life, tomorrow. If you want to learn more about what you can do, learn about Scale Down for Relief. There you can download a brochure or even set up a time for us to call you to discuss our programs in more detail. Don’t wait – do it now!